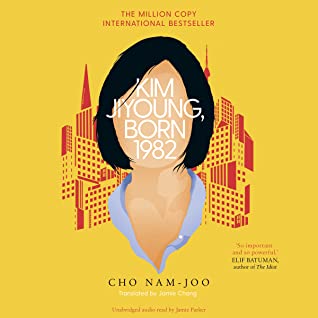 I love Korean and Japanese translated books. I am also a feminist who is tired of explaining the need and essence of feminism. So when I came across the book Kim Ji-Young, Born 1982 by Cho Nam-Joo, I was super excited to get my hands on it.

At home, she is an unfavoured sister to her princeling little brother.
In primary school, she is a girl who has to line up behind the boys at lunchtime.
In high school, she is a daughter whose father blames her for being harassed late at night.
In university, she is a good student who doesn’t get put forward for internships by her professor.
In the office, she is an exemplary employee who is overlooked for promotion by her manager.
At home, she is a wife who has given up her career to take care of her husband and her baby.

Kim Ji-young is sent by her husband to a psychiatrist.
This is his clinical assessment of the every woman in contemporary Korea.

What I think the book is about

The book starts with Kim Ji-Young as a young mother and home maker, describing her life in her apartment in Seoul with her husband and child. It talks about how she starts to act weirdly and soon enough concerns her husband to a point that he has to take her to the psychiatrist.

Then, the remaining book takes us through the time she was born 1982 to 2016 – her childhood, her adolescence, her university days, her job and then her marriage and motherhood.

It’s a story of the life of a woman – not just the one who grew up in the 90s and not just of the one who is Korean – but of every woman around the world. It is unfair, frustrating, sad and extremely and unnecessarily disadvantaged.

The tone and writing style of the book

There is a narrator, who only at the end of the book I realized was the psychiatrist?

There were numbers and statistics that took us through the average life of an average woman in Korea back in the day.

There was not much emotion, it was very factual and perhaps that was on purpose, since the psychiatrist is male and no man can ever truly know or know and ever truly understand or understand and ever truly care enough to make the world a less unsafe, unjust world for women.

Sure, one can now go ahead and harp the “not all men” whine but honestly it’s all the men I’ve come across.

What it did for me:

It further solidified my decision of not wanting to be a mother or be married in the traditional sense where I have to sacrifice my dreams, goals and self.

It made me angry and sad and remember the quote –

Don’t put everything on the line for a man. That’s the worst thing you can do as a woman.

And putting everything on line for a man is not just a man in the romantic sense. It can be a brother, father, friend – whoever.

What it could have done better

While I understand the lack of narration or emotion at the part of the protagonist Kim Ji-Young was probably trying to prove the lack of voice and attention our society gives to women or well, even value.

However, I think at the end to beat exactly everything the book is supposed to be against, the epilogue or the last few chapters could have been through Kim Ji-Young’s perspective. Because yet again, we let a man tell a woman’s story (I get that the author is female but I’m referring to the narrator).

Would I choose to not read the book if I could go back?

No, I would totally still pick it up. I think, from time to time, it’s important to read such books because they remind you that all these changes in the world are no where close to what should be the norm and we shouldn’t have to be apologetic or thankful just yet.

I also just realized that there’s a movie based on this book so I’m gonna grab myself some food and go watch it right away!

Women, we, live our lives not saying so much of what we really want to because we just want to get through an unfair world without making it even harder. It’s the tiny, everyday experiences that over time being the norm.

I think the last time that something like this happened with me was when a senior at work spoke about how women should not step out of their homes to work, just like his wife didn’t, because they are naïve and will be fooled by men into their beds.

Yes, let that horror sink in.

I think reading this book is like seeing your own experience as a woman being portrayed. Irrespective of the age, country or background, we all go through the same annoyances and atrocities.

Do you remember the last time you were in a situation where a man said or did something that left you absolutely stunned and or disgusted?

I’m a 20-something writer working

To create a safe space for all those yearning

To understand the emotions inside them bursting

And waiting to reach a heart deserving

Of the magic inside them brewing.

This, like everything else online, is very contextual. But it's essential to remember that our self care cannot exist in isolation of what we do to (harm) others (intentionally and unnecessarily).
4⭐
Do you agree or do you agree?
A few moments of intention. That's something I can surely give my body and breathing each day.
It's hard to come across a book that's heartfelt and humorous. This one is perfectly that and an engaging read from from the first page to the last.
I like reflecting and making lists. When I sat to do so about how 2021 has been so far for me, this poem demanded to be written.
%d bloggers like this: